The Ministry of Corporate Affairs in its continuous effort to boost the startup ecosystem has made some operational and compliance relaxations for Startups, Section 8 Companies and Government Companies.

In its notification dated 13th June 2017, the MCA has made some amends to its initial notification under G.S.R. 464(E) dated the 5th June 2015 published in the Gazette of India, Extraordinary, Part-ll, Section 3, Subsection (i).

For the purpose of the following notification, the term ‘Start-up’ or ‘Start-up company’ means:

“A private company incorporated under the Companies Act, 2013 (18 of 2013) or the Companies Act, 1956 ( 1 of 1956) and recognised as start-up in accordance with the notification issued by the Department of lndustrial Policy and Promotion, Ministry of Commerce and Industry.”

c) if its turnover for any of the financial years since incorporation/ registration has not exceeded Rupees 25 crores. 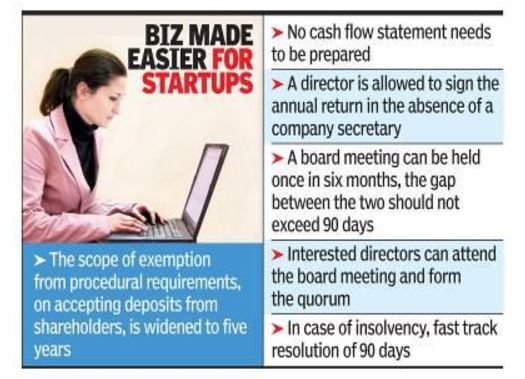 Further exemptions were issued for Section 8 companies and Government companies as well.

For the purpose of the notification, a section 8 company is defined as:

“Section 8 company is a company registered under the Companies Act, 2013 for charitable or not-for-profit purposes. It pertains to an establishment ‘for promoting commerce, art, science, sports, education, research, social welfare, religion, charity, protection of environment or any such other object’, provided the profits, if any, or other income is applied for promoting only the objects of the company and no dividend is paid to its members.”

For the purpose of the notification, a Government company is defined as:

The following are the exemptions that have been issued for Government companies as defined above:

Important Note: All the exceptions, modifications and adaptations provided to Private Companies, Section 8 Companies and Government Companies stand automatically be withdrawn if they fail to file their Financial Statements or Annual Return with the Registrar.

To know more about the above-mentioned relaxations for startups and other companies, talk to our experts at Integra Books today.