Previously we wrote about the complete list of GST rates for Goods and Services that was finalized by the GST council last week in Srinagar. The Council has broadly approved the GST rates for goods and services at nil rate, 5%, 12%, 18% and 28%. Today we will dive deep into the GST impact on the Indian sectors while mentioning the list of winners and losers, as a result, of these tax rates.

Before we talk about the impact of GST on the various sectors individually, here’s an ultimate list of the tax rates for both Goods and Services.

Revised rates for 66 Items by the GST Council

Finance Minister Mr. Arun Jaitley, who is also the chairman of the GST Council, highlighted that the necessary revisions were made after considering the recommendations of the fitment committee.

“There were 133 representations… These were considered at length,” he further added. 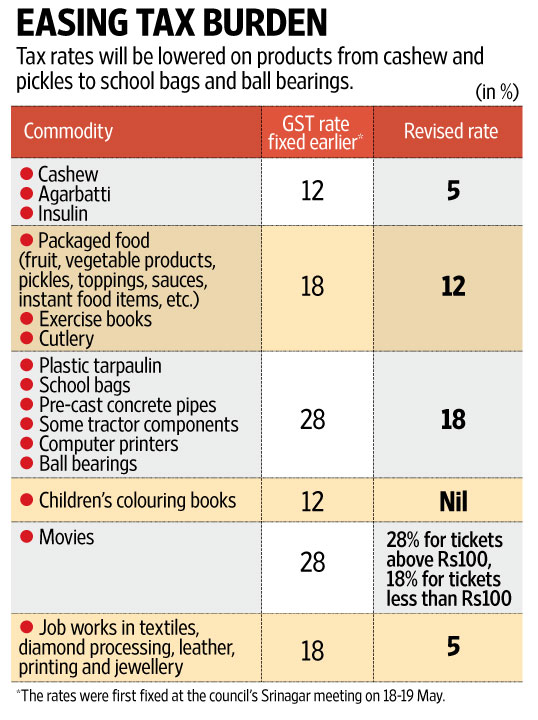 The complete list of revised GST rates can be found on the Central Board of Excise and Customs website.

GST Impact on Indian Sectors – Who are the Winners and Losers?

The first entry in the winner’s list is the FMCG sector. The prices of hair oil, malted beverages, toothpaste, and soaps are likely to fall by 5-6%. The prices of chocolate, skin cream, detergent and shampoo may rise. The rates for cooking oil and instant noodles remain unchanged.

For automobiles, the effective tax at present is around 28-31% including state VAT, central state tax (CST), excise duty and national calamity contingent duty(NCCD). All automobiles under GST will attract a 28% tax rate except tractors.

The tax rates for SUV might drop by 6-10%. Automobiles in the luxury segment might get cheaper by Rs. one lakh. In addition, cars that are lengthwise more than 4 meters will attract 15% cess.

The prices of retail are more likely to stay unaffected as per Bajaj Auto.

Before and After – Changes in Automobile tax rates

Companies like Blue Star, Voltas, Havells, Whirlpool, and V-Guard are likely to get impacted due to high tax on air conditioner, water heater, and refrigerator. Companies like TTK Prestige to benefit as tax rates on cookers are lower. The tax rates for tiles, faucets and sanitary ware have been increased from 18-24% to 28%. This might hurt the volume growth of Kajaria, Cera, HSIL and Somany.

This sector might have a marginal negative impact due to the given GST rate of 28% as compared to the 24-25% effective rate at present.

From the present rate of 24-25%, the tax on paints has been increased to 28%. This might impact the volume growth of Berger, Shalimar, Kansai Nerolac, Akzo Nobel and Asian Paints.

Coal India might benefit as the duty on coal has been reduced to 5% from the current rate of 12%. This lower price will result in attracting power producers to move away from imported coal. Companies like GMDC might be a major beneficiary due to a decrease in tax rates to 5% from the current rate of 37%. For companies like Vedanta, Tata Steel, Hindalco, and JSW Steel the lower taxes on metal ores will result in lower input costs.

The effective tax rates for Cigarettes would be around 55-60% including the GST rate of 28%.

What is your take on the GST rates? Let us know your thoughts in the comment section. For more updates on GST, stay tuned to our blogs.